A cosmic gamma ray detected zipping across the Milky Way has broken the record for the most energetic we've found yet, clocking in at a whopping 957 trillion electronvolts (teraelectronvolts, or TeV).

This not only more than doubles the previous record, it brings us close to the range of petaelectronvolts (that's a quadrillion electronvolts) - finally confirming the existence of cosmic superaccelerators that can boost photons to these energies in the Milky Way.

Such a superaccelerator is called a PeVatron, and finding them could help us figure out what is producing the high-energy gamma rays streaking across the galaxy.

"This pioneering work opens a new window for the exploration of the extreme Universe," said physicist Jing Huang of the Chinese Academy of Sciences in China. "The observational evidence marks an important milestone toward revealing cosmic ray origins, which have puzzled mankind for more than one century."

The detection was the most energetic in a haul of 23 ultra-high energy gamma rays detected by the team, above the range of 398 TeV, at ASgamma, a facility jointly run by China and Japan in Tibet since 1990.

Interestingly, and unlike the previous record-holder, which was traced back to the Crab Nebula, these 23 gamma rays didn't seem to point back at a source, but were spread in a diffuse way across the galactic disk. 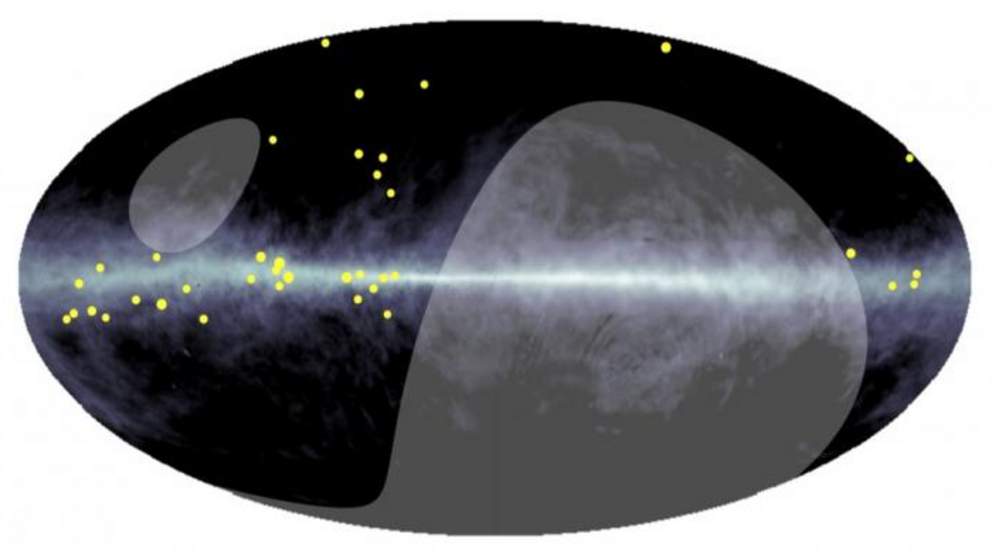 Distribution of the gamma rays.

Above: Gamma ray distribution. The galactic plane is the glow in the middle; the grey areas are outside ASgamma's field of view.

They could, however, still tell us where we could try looking for PeVatrons within the Milky Way - which, in turn, could lead us to finally discovering where the Universe's most powerful cosmic rays are born.

First, we need to draw a distinction between cosmic rays and gamma rays. Cosmic rays are particles such as protons and atomic nuclei that constantly stream through space at almost the speed of light.

Ultra-high-energy cosmic rays are thought to come from sources such as supernovae and supernova remnants, star-forming regions, and supermassive black holes, where powerful magnetic fields can accelerate particles. But it's been hard to pin down these ideas with observations because cosmic rays carry an electric charge; this means their direction changes when they travel through a magnetic field - which the galaxy is absolutely loaded with.

But! These powerful little particles don't just zoom around consequence-free. They can interact with the interstellar medium - gas and dust that hangs around in the space between the stars - which in turn produces high-energy gamma-ray photons, with about 10 percent of the energy of their cosmic ray parents.

This happens close to the PeVatron - and gamma rays don't have an electric charge, so they just zoom straight through space from A to B, completely unbothered by magnetic fields.

If we're lucky, B is Earth; the gamma ray collides with our atmosphere, producing a cascading shower of harmless particles. It is this shower that ASgamma's surface Air Shower array picks up.

Underground water Cherenkov detectors were added in 2014 to detect muons produced by cosmic rays, allowing scientists here on Earth to extract the cosmic ray data from the background in order to more cleanly detect and reconstruct the gamma ray showers.

This is how the collaboration detected their record-breaking Crab Nebula gamma ray; and now, how they've found their 23 ultra-high-energy gamma rays, including the even more record-breaking PeV-range gamma ray. Their existence and diffuse distribution implies the existence of protons accelerated to perhaps even the 10 PeV range - suggesting ubiquitous PeVatrons scattered across the Milky Way, the researchers said.

The next step will be to try and find them. It's possible that at least some of them are extinct, and no longer active, leaving only cosmic rays and gamma rays as evidence.

"From dead PeVatrons, which are extinct like dinosaurs, we can only see the footprint - the cosmic rays they produced over a few million years, spread over the galactic disk," said astrophysicist Masato Takita of the University of Tokyo in Japan.

"If we can locate real, active PeVatrons, we can study many more questions. What type of star emits our sub-PeV gamma rays and related cosmic rays? How can a star accelerate cosmic rays up to PeV energies? How do the rays propagate inside our galactic disk?"

It's even possible - like with so many things - that there is more than one answer to all of these questions.

Future work, from both ASgamma and upcoming detectors such as the Large High Altitude Air Shower Observatory, the Cherenkov Telescope Array, and the Southern Wide-field Gamma-ray Observatory, could finally help us find them.

The research has been published in Physical Review Letters.