FIELD OPS MANAGER AT CNN: ZUCKER’S 9AM CALLS ARE ‘BULLSHIT;’ “WE’RE TOTALLY LEFT-LEANING…(BUT) WE DON’T WANT TO ADMIT IT”

(WASHINGTON, D.C.)  On Monday, October 14, 2019 Project Veritas released the first of its Expose CNN series about the inner workings and candid observations of CNN employees and executives as captured with a hidden camera by CNN Insider Cary Poarch.  The first report was followed by Part II in the series on Tuesday, October 15, 2019 where Cary had casual conversations inside CNN regarding the candidates for the Democratic nomination for President.

Today, we are releasing Part III exposing the network’s movement away from objective newsgathering and towards partisan advocacy.

According to James O’Keefe, President of Project Veritas, “CNN has made a conscious decision to focus almost exclusively on the impeachment of President Trump at the expense of covering legitimate news around the world.”

CNN Coverage Used to Be Different

According to CNN insider Cary Poarch, “I want to chase the facts, like the motto that CNN put out earlier this year, ‘the facts first,’ that’s what I want the news to be. That’s what it should be. That’s what it used to be.”  It appears a number of CNN staffers agree:

Patrick Davis, Manager of Field Operations at CNN: “…I hate seeing what we were and what we could be and what we’ve become. It’s just awful…I mean, we could be so much better than what we are…And the buck stops with him (Zucker).”

“I haven’t listened to a 9AM call in about 15 years. I just stopped,”complains Manager of Field Operations at CNN Patrick Davis, “Just, I can’t listen to it. It’s all bullshit. It’s all just a bunch of bullshit. And I wish that wasn’t the case.” Scott Garber, Senior Field Engineer at CNN: “We used to cover news. We used to go out and do stories…But Trump is more important.”

Adia Jacobs, CNN Technical Operations Supervisor: “When Zucker took over it wasn’t until Trump that we ended up being all Trump all the time.” 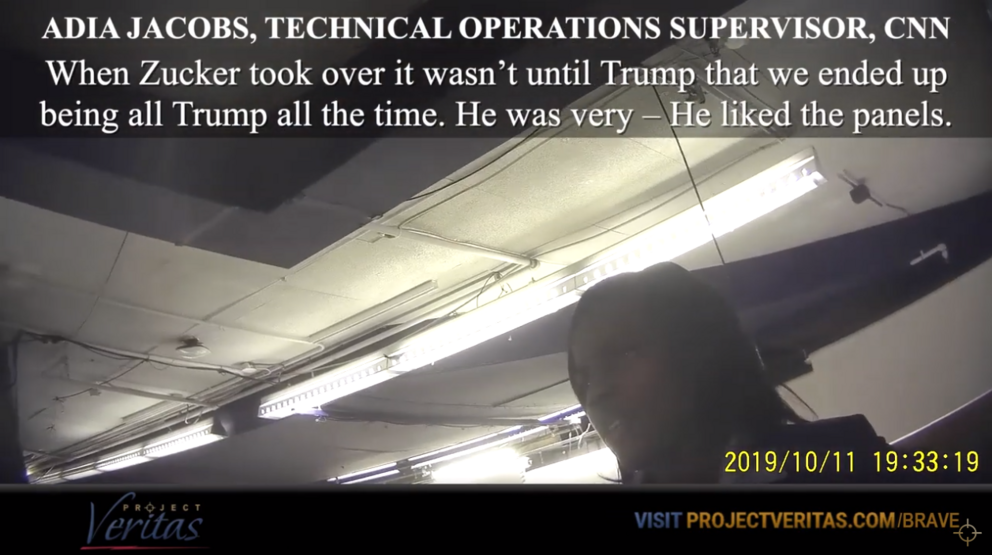 Mike Brevna, Floor Manager at CNN:“It’s the Trump Network, dog. It’s like everything is all Trump…they not even thinking about anybody else. They sold themselves to the devil.”

Gerald Sisnette, Field Production Supervisor at CNN: “This is a story that’s not gonna go away…The only way this will go away is when he (Trump) dies. Hopefully soon.” Patrick Davis, Manager of Field Operations at CNN: “And you learn it in journalism school, we’re supposed to be middle of the road, that’s our job. Now it’s just infotainment is all it’s become. There is no true media news outlet.”

Jeff Zucker, CNN President: “So, my point here is, I know there’s 7,000 impeachment stories that – Look, I am the one that’s saying we should just stay on impeachment, but when, you know, when a story of this magnitude comes up (referring to the story of alligators and snakes in a moat and shooting immigrants in the legs) and you can objectively say, you’re out of your mind. You should do it and say you’re out of your mind.” Poarch concludes: “I want CNN and any other outlet to basically return to what they once were, where hey, we tune in to get our facts. We can make up our minds left, right, center, whatever. Cool, and we go on with our lives. I don’t want anyone to basically, you know, be spun into believing or programmed into believing one way or the other. That’s not what I’m about and that’s why I’m coming forward.”

Project Veritas intends to continue its investigation into corruption in the Mainstream Media. We encourage brave insiders at these organizations to come forward with any information they have, so that the public knows what is really going on within these media companies.