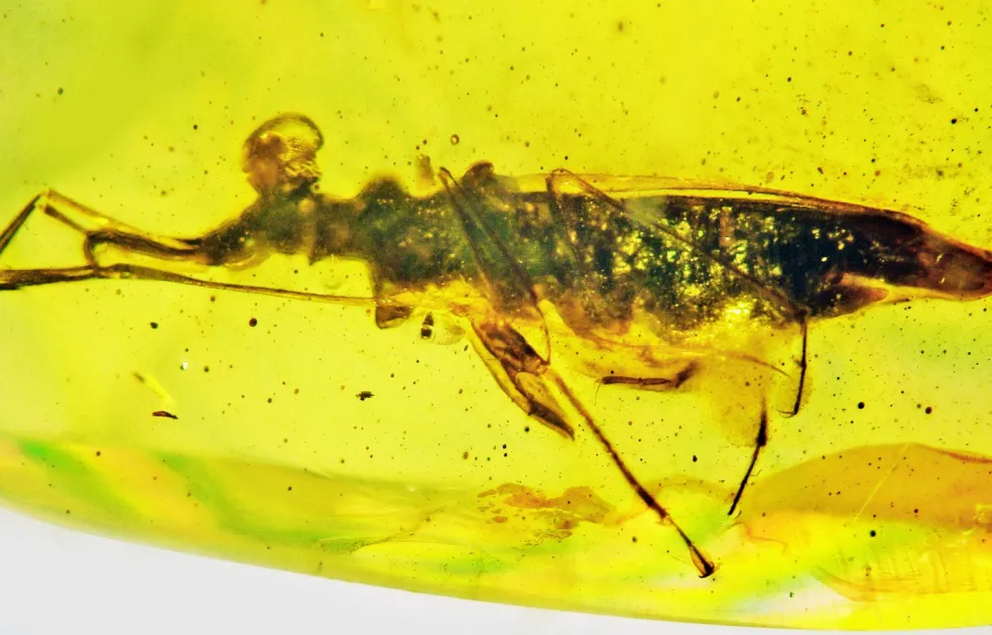 When it comes to human eyesight, no one literally has “eyes in the back of their head.” However, a newly discovered insect fossil apparently enjoyed 360-degree vision!

Along with bulging eyes, an elongated mouth, and feet that oozed resin (to stick to surfaces), this bizarre creature is so different from anything alive on planet Earth today that scientists needed to place it in its own, extinct category!

George Poinar Jr., professor emeritus in the Oregon State University College of Science, officially named the insect Palaeotanyrhina exophthalma (P. exophthalma). Preserved within a 100-million-year-old piece of amber from Myanmar, P. exophthalma is officially a member of the Hemiptera order, or a “true bug.”

“It is a small predator that used its protruding eyes to locate insect prey,” Prof. Poinar says in a university release. In the same family as bed bugs and cicadas

Prof. Poinar is an international expert when it comes to examining plant and animal life forms preserved in amber. He peeks into the biology and ecology of the distant past.

Over 80,000 species make up the order of Hemiptera, which is an ancient Greek word meaning “half-winged.” Just a few examples include aphids, planthoppers, leafhoppers, bed bugs, cicadas, and shield bugs. While sizes vary greatly within the order, all of these insects share a similar arrangement of sucking mouthparts.

P. exophthalma, specifically, has a body length of just over five millimeters (0.2 inches). Notably, the insect does share some features with the Reduvoidea superfamily. This family features an assassin bug and a kissing bug. However, P. exophthalma’s long lower mouth, head shape, and forewing veins make it ineligible for placement within any modern Reduvoidea family.

So, researchers created a new, extinct family for it: Palaeotanyrhinidae.

“Its eyes provided a clear, 360-degree view of its habitat so it could see prey that might appear from any side,” Prof. Poinar explains.

Poinar says the fossilized insect reminds him of George Orwell’s classic novel “1984,” and the iconic phrase “Big brother is always watching you.” Finally, study authors add that another strange feature of this fossil is an extended sheath on the final leg segment of the front tarsus.

“That sheath was filled with a resinous substance,” Prof. Poinar concludes. “The sticky substance was produced by dermal glands and helped the insect grasp potential prey.”

The findings are published in the journal BioOne Complete.

Originally from Long Island, John has been writing professionally for over 7 years. When he isn’t writing about the latest scientific studies, you can find him working on his first horror novel. John splits his time between the United States and Kraków, Poland.